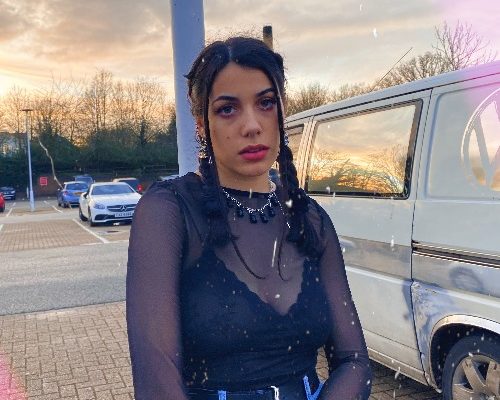 WANT TO HEAR MORE? Kayla Grace is taking part in RISING, our brand new series of live-streamed events, which aims to support and raise money for War Child UK to assist their work during the Covid-19 crisis.

Who is Kayla Grace? Where are you from, how long have you been playing music etc

I’m a 19 year old singer songwriter from Watford. I’ve been singing since I was in nappies honestly but only picked up a guitar and started writing about 4 years ago.

This is a question I always struggle to answer because my taste in music varies massively and what I listen to on the daily isn’t necessarily what influences my original music. Generally speaking, I take specific aspects of inspiration from every artist I listen to. For example, the unique concepts of Melanie Martinez, The abstruse vulnerability of ‘The Japanese House’, The harmonic choices of ‘Radiohead’, The unpredictability of ‘Billie Eilish’, and the radiating female strength of ‘Amy Winehouse’.

For some reason my brain is more creatively stimulated when I’m about to go to sleep so typically I begin by laying in my bed with my guitar on top of me and playing a random spontaneous chord sequence until I sing a melody or some lyrics that resonate with the way I’m feeling at the time. Then I quickly voice note my idea and go to sleep. Other times I already have a concept or title for the song and I just sit down and build from it.

When I was 10 my sister lent me her iPod on a long trip home from seeing my grandparents. The only album she had was Ed Sheeran’s ‘+’ and so I played it on repeat through the night while watching the streetlights flash past. Weirdly it was the first time I really sat through a whole project from an artist, before that I had only ever listened to random songs on the radio not knowing who was behind them. The next day I listened to my dads favourite album ‘Consciousness’ by Smile Empty Soul and found my love for rock music.

Its hard to pinpoint a single moment since I’m still very much an emerging artist, but it would have to be either my headline show at the o2 Academy islington or the fact that ‘Queen’ members Brian May and Roger Taylor chose me out of many applicants as the single winner of a scholarship (to my university ACM)- dedicated to Freddie Mercury. That was the first time I felt that someone really saw me and believed in my passion for the industry.

Probably The Japanese House just so that I can cry backstage through the whole set hahah.

I honestly can’t answer that because I feel like all the bands I love are a perfect match of artists put together, for example Pierce the Veil, The 1975, Pale Waves and Nirvana. No adjustment of instrumentalist could make those any more legendary in my opinion.

I’d firstly have to warn them about my language since I have a potty mouth and have to remind myself not to swear every two minutes. My show is usually a combination of stripped back acoustic versions of my songs and full blown backing track supported songs featuring my awful dancing when the bass drops. My shows are quite dynamic and I like to think they’re pretty engaging…. Or I hope so at least.

I don’t really do much pre gig, honestly I often don’t even do a vocal warm up which is so bad. I like to just focus on my breathing and run through the setlist in my mind and then I’m good to go. I usually get a post gig adrenaline high so I’ll either go out for drinks or go home and irritate my parents with my hyper-ness.

I don’t really have one as long as its black and shiny to match my entire wardrobe. Maybe a black G wagon or something just to be cliché. And honestly I wouldn’t mind being called a diva I’d take it as a compliment to my car lol.

I won’t lie I’m actually a big fan of Bhad Bhabie (The catch me outside girl from Dr Phil). I started listening to her ironically when I heard she had released music but now I can fully dance in my room to it for hours. The lyrics are genuinely good though that’s the only bit I’m not embarrassed about.

Most my fans think I’m a tough moody cookie 24/7 since I wear black everyday and write hate songs but I’m actually a very sensitive and emotional person, I secretly collect toy pandas because they’re my favourite animal ever and I am very passionate about animals and I sometimes even wear fluffy pink pyjamas to bed. I also spend a lot of time watching kids shows because my older sister has special needs and likes to hijack the TV. My personal favourite show is Horrid Henry since I resonate with Mood Margret on a personal level.

I’m most active on my instagram (@kaylamusic), youtube (Kayla Grace) and Tiktok (@kaylagracemusic) but if you search ‘Kayla Grace’ on any major platform like Spotify etc you can find my original music.

As soon as lockdowns over I’ll be getting back into gigs. I’m also intending to start busking around London which is exciting and something I never thought I’d give a shot. I’m currently building up a portfolio of songs and writing up ideas for my next release concept.