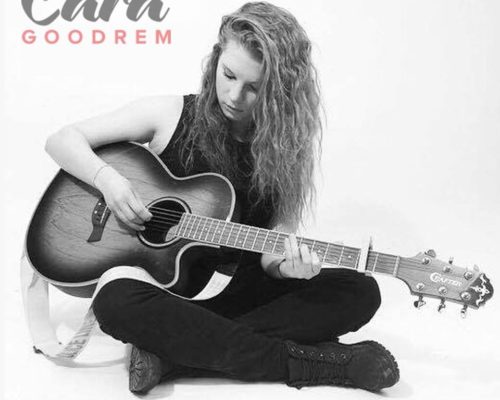 20 year old Cara Goodrem is an Indie/Folk acoustic singer/songwriter from the South coast of England, with a big voice, and even bigger aspirations.

Cara took inspiration from a wide range of musical genres growing up, particularly Indie, Pop and Country, which can be found in her work. This has led Cara to branch out when it comes to writing and performing, focusing on narrative lyricism from her personal life, to capture a sense of experience and wisdom within her work. Cara’s passion for a vast array of genres means that her performances can vary from slow, melodic songs, to upbeat tongue twisters.

Cara is a solo artist, engaging her audience with just vocals and a guitar. She is currently working on her first EP, “Diamonds and Stones”, due for release in summer of 2018. Cara continues to gig in the South coast of England to spread her lyrics to a wider fan base.

Opening the Main stage of the Fairweather Festival, Cara performed on the same bill as artists Professor Green, Lucy Spraggan, Luke Friend, and the Chuckle Brothers, as well as recently performing at the Isle of Wight festival and VDub festival. Cara has showcased some of her music on radio stations such as Russell Hill’s Country Music Show, and Vectis Radio, as well as performing for Anneka Rice, Mark Hill, Chris Grayston, Rob Da Bank, and Nick Courtney. Anneka expressed her interest in Cara’s music explaining that she “Hopes to hear her on BBC Radio soon!”, and was described as Confident, Fantastic, and Unique by a large array of audience members, including Russell Hill, and Nick Courtney. Cara is described to have good composure, and works on delivering vocals with added projection. She uses smart lyrics to make her songs engaging, leaving the audience wanting to hear more.