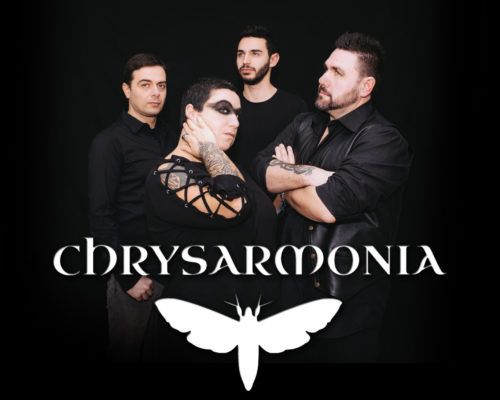 Italian band, grown on the Milan and Pavia axis, Alternative Hard Rock Metal genre (but someone called us Hard Soul, and other Heavy Blues)
The CHRYSARMONIA project was born in mid-2017 from an idea of ​​the four musicians: Vania Guarini (composer and voice), Fabio Chiappella (drums), Davide Paggiarin (guitars) and Simone Pampuri (bass).
Already members of the cover band “5 A CASO” for almost a decade, the four decide to give space to some unpublished works composed by the vocalist Vania, proposing some of them during their concerts and receiving positive criticism.
Urged by this interest, they decide to give more space to their creativity, concentrating on the realization of their songs.
Vania creates the songs (music and lyrics). Not only does she create melodies and fitting harmonies on his typically soulful voice, but she writes the songs according to the characteristics of her companions, well knowing their inclinations and abilities, giving space to their individual creativity.
In the summer of 2018, four of these unreleased tracks begin with a cover.
The result will be the EP “METAMORPHOSIS” (little more than a DEMO to keep our feet on the ground) that is anticipated on December 28th 2018 with the release of the video “I Know Who I Am” made for Chrysarmonia by the talented Silvia Carotti (ImagoEdit – Rome), and entirely published on 01/28/2019 on all digital platforms (Spotify, I-Tunes, Deezer and YouTube)
In the first 6 months of activity a good response is obtained in the various contests, among which we underline:
A) 1st place at Acciaio Italiano (Mantova April 2019
B) San Remo Rock (Lombardy Regional Final – Milan Critics Award on May 2019
C) Emergenza Festival (Italian Finale, Alcatraz Milan 28 June 2019)

Also the EP “Metamorphosis” and the video, get good results, considering the fact that there is no label or agency that follows the band. In addition to the feedback from the public, there are several radio stations, mostly web, but also FM. To name a few of the most important, Linea Rock (Radio Lombardia), Radio Stella Piemonte, Atom Radio, Metal Maximum Radio.
Having a need for a professional production, it was decided to rely on RECLAB by Larsen Premoli, with whom in June 2019 he recorded “FAST” a song written in memory of the victims of the tragedy happened in Nice (France) last 14 July 2016
The production of the album “Evolution” has already been established with Premoli, due out in October 2020.
Meanwhile, it plays on different important stages in the northern of Italy.

The four, who are not professional musicians, find their sound thanks to their personal musical paths and experiences and to the studies undertaken and still in progress, without underestimating the complicity that has united them for years. Their particular attitudes (Soul, Metal, Blues, Funk, Rock) create something alternative, intimate, familiar but at the same time new, with the mission of giving strong emotions to the listener.