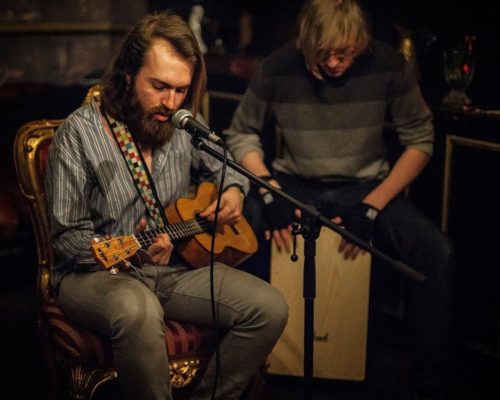 I gig in London, and have recently been lucky enough to gain a residency at the Bedford Tavern, at their ‘Thank Folk It’s Tuesday’ show (what a great name?!)!
My gigs are either solo or not. There’s a thing called the Dan Simpson Quartet cos I’m posh like that. It has 4 members, cos that’s traditional. One is me. One is Alex Walls, on basses of many kinds. One is Dave Ide, on a fiddle and occasional funny remarks. One is Matt Ide, who is the brother of another of the members (who can guess which one?) and hits lots of things as well as being in charge of the overall sound of the band. We often gig with other people as well, because we love improvisation. Basically, it’ll be a surprise who turns up (unless you’re really against that, in which case we’ll be sensible).

I have released two live demo EPs, called the Chapel Sessions. They can be downloaded for ZERO MONIES on bandcamp, or a CD version can be bought. There’s also a great single for Christmas, which is also available there.

‘Transports you to another place.’ – Indied
‘Go watch my videos of Danzi, cos he’s a reasonably decent musician sometimes’ – Rhii Rendell