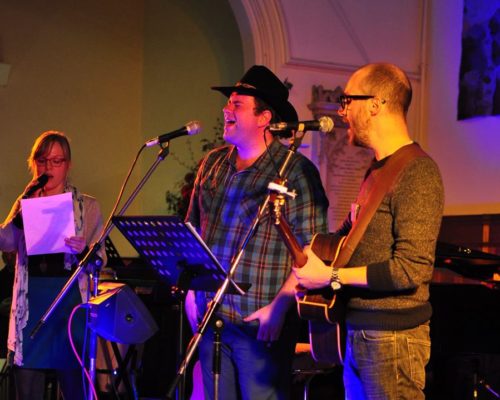 eft Park Community School, Havant in 2005 receiving highest grades in Music GCSE and Grade 7 Vocal. Having taken part in school productions from the age 11, He was always used to backstage, doing lighting and sounds for the shows. In 2003, he landed the role as the Narrator in his school production of ‘Joseph And His Amazing Technicolour Dreamcoat.’ In 2004 he landed the role as Balladeer/Narrator in John Gleadall’s version of ‘The Scarlet Pimpernel.’ This is also the same time he picked up the guitar for the first time. He had eight weeks to learn to play! In 2005 His last school production was playing Bob Cratchitt in the John Gleadall version of ‘Mean Old Man’ a new and upcoming version of Scrooge. As a 15 year old he even had a stint as a junior reporter for the BBC. In 2006 Dave travelled to paris to do a couple of shows in the Jardin De Luxembourg and performing on the prestigious main stage in Disney Land Resort Paris.

In 2006 Dave attended South Downs College, Purbrook and obtained the highest marks in his year group in BTEC National Diploma Level 2 in Music Technology and Technical Theatre. Throughout his college years he also vollunteered and worked on to a fully paid role with the UK Rock Challenge Tour. Dave would perform on professional stages with tens of thousands of school students all across the UK such as Portsmouth Guildhall, Southampton Guildhall, Belfast Waterfront Hall and many many more. During his time on these event’s, he worked with Emma Watson (Hermione Granger, Harry Potter) when she was at her school taking part in the events. After receiving his qualification he went on to study Stage Management and Technical Theatre at Newport University.

Despite working on tour for such a long period of time, Dave still found the time to run and co-ordinate the Leigh Park Carnival in his home town Havant. He did this successfully alongside Havant Borough Council for 3 years. He was only 16 years old when he started this. Since 2008 Dave has setup his own entertainments company, he is in a band and has achieved accolades from music competitions to local pride awards. Dave was also lucky enough to meet HRH Princess Anne on his 18th Birthday in recognition for all his work within the community.

In 2012 Dave performed alongside, Tracy Shaw (Coronation Street), Marcus Patrick (Hollyoaks), Leah Bracknell (Emmerdale) and Tom Owen (Last of the Summer Wine) for a Charity Gala in aid of raising money for a teenager diagnosed with cancer.