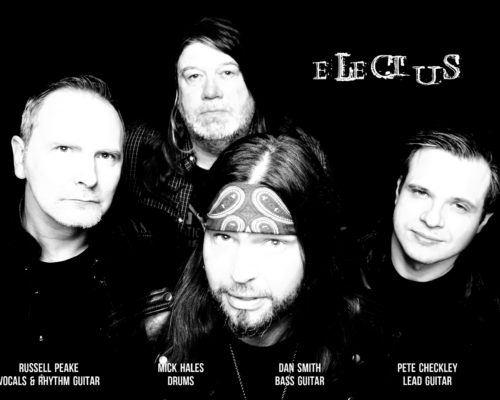 ELECTUS can be accredited to Rhythm Guitarist/Vocalist Russell Peake in early 2008 when he knew that it was time to form a group that would satisfy his hunger & Passion for Hard Rock Music. As the music progressed concentrating on song writing from 2003 & from the initial acoustic recordings & occasional touring the song list grew, the line-up expanded to welcome Dan Smith in 2014 on Bass. A couple of line-up changes later in  2015 the band welcomed Mick Hales on the Drums & Ross Kane on Lead Guitar!
With an appropriate line up complete ELECTUS! wasted no time learning the material into a set list of songs and launching onto the UK gigging circuit.
ELECTUS! has no boundaries blending all the elements which have influenced the band along with melodic chorus lines giving the band the breathing room to experiment their passion.
ELECTUS will always create music which conjures the full range of emotions & deliver a Visual live performance that leaves the audience thinking “WOW!… More Please!”
2015 is set to be a busy year for the band as they plan to record and release a 12” vinyl single, & CD.. A Gate-fold Double Album & will be embarking on a promotional tour
throughout the U.K. & Europe as well as rehearsing material for their next full length release.
Reviews –
– Terrorizor Metal/Rock Magazine
Hailing from Wolverhampton with the ambition to play their music all around the world, these classic rockers channel the spirit of all the great bands that make music what it is today. The band produce catchy music that you can enjoy, whether you like riffs, vocals or just a rhythm you can tap your foot to.
– (Andy Thorley – MVM)
Late additions to the bill they may be but Wolverhampton hard rockers ELECTUS! are here to bring the groove. Although they claim to be scared we don’t believe a word, as there is a cocksure swagger to their songs. Lead guitarist Richard Bennett and Vocalist / Rhythm Guitar Russell Peake dovetail really well, particularly on tracks like the mid-paced “Tomorrow”, Which has more than a touch of southern Rock about it, and it passes MVM’s cowbell test….they find time to cover. Hendrix’s “Hey Joe” which Russell introduces as being “about an ex… – given its second line of “where you going with that gun in your hand,” we decide to keep on his good side. Actually with ELECTUS! its easy – there is a lot to like here. Closing tune “Morning Psalm” (“the first one we rehearsed back in 1653” says Russ) has a similar feel of Black Stone Cherry at their best, and ELECTUS! seem set to win a lot of votes (sorry, we had to!)
– http://www.smashmouthmetal.co.uk/
Ok, so ELECTUS! have an album coming out this August and have asked me to do a little review and after hearing the three tracks they sent over I have to say that I'm quite
excited to hear the rest of it! Being completely honest I'm not a fan of this kind of dirty rock but they definitely have something special going on here, I guess that's why
I do what I do here with SmashMouth, because there is always something around the corner that will take me completely by surprise. The first track on the hitlist is "Rider" and from the get go its all deep bass and gritty guitars, the song has a deep groove to it and when the aforementioned are combined with the vocals it lays down something truly special forcing you to sing along the that chorus! Sexy as hell! Next up is "Aphrodite" starting a little heavier, the bass and guitar work in perfect harmony here with the odd little lick here and there before the song breaks open into an awesome guitar solo which knocks up the tempo a notch. The whole song kinda sets an image in my mind of leather clad misfits grinding pool tables and drinking shots! Aha! The third and final track "Just for one Night" is full of those gritty guitars and solos, the bass thumping deep,
makes it a definite foot stomper! Again those strong guitar solos are thick and fast and leave your begging for more! I really cannot wait for the album release, and it has been a pleasure to have been asked to review this stuff. I'm no professional, I'm a music fan and that is why I love doing it!
If you're reading his, I suggest you get over to their Bandcamp page and hear it for yourselves! I look forward to the album release!
We have a young / mature / flexible approach as a band, if you know your tool & you have the right attitude.. your in.. & the same goes for the approach in song writing, “If you can tap your feet, dance & Sing to it & if i would buy it? It’s in”. Says the founding member & principle songwriter..
Influences – Jimi Hendrix, Led Zeppelin, Kiss, Megadeth, Rob Zombie, Opeth, EPICA, ludovico Einaudi to name but a few…..
Links to our new single “Rider” // “Aphrodite” // Just for one Night”
1 – ELECTUS! – "RIDER" (ALBUM VERSION) – (SoundCloud)
https://soundcloud.com/official_electus/rider-album-version?utm_source=soundcloud&utm_campaign=share&utm_medium=email
2 – ELECTUS! – "APHRODITE" (ALBUM VERSION) – (SoundCloud)
https://soundcloud.com/official_electus/aphrodite-album-version?utm_source=soundcloud&utm_campaign=share&utm_medium=email
3 – ELECTUS! – "JUST FOR ONE NIGHT" (ALBUM VERSION) – (SoundCloud)
https://soundcloud.com/official_electus/just-for-one-night-1?utm_source=soundcloud&utm_campaign=share&utm_medium=email
www.electus-music.uk
www.facebook.com/Electus.Official.uk
www.twitter.com/electusuk
www.soundcloud.com/official_electus
Contact us – info@electus-music.uk