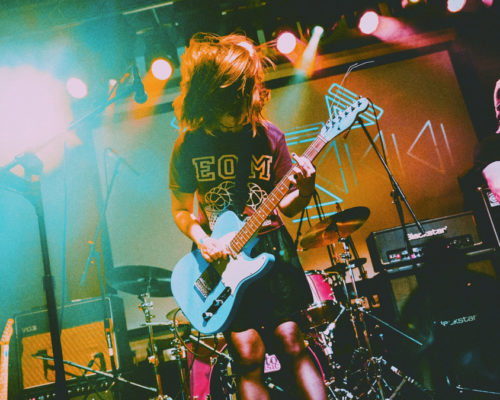 Born out of a desire to prove what is so vital about raw, energetic live music. Manchester based False Advertising address modern discontent in their music, fusing sweetly snarling hooks with a cathartic hit of fuzz-guitar.

Musically, the trio carry echoes of underground ‘90s alternative grunge. Over time developing as much of a name for themselves as “The ultimate DIY band” catching the attention of NME who recently featured them in their print edition as one of the UK’s leading unsigned acts and catapulting them to Texas’s SXSW festival where they were chosen for DIY and Ticketweb’s much sought after British Music Embassy showcase.

Their latest single ‘Not My Fault’ has been championed by John Kennedy (Radio X), Huw Stevens (Radio 1) and Steve Lamacq (BBC 6 Music). Last year the band hit UK festivals, Sound City, Kendal Calling, Dot To Dot and Off The Record, as well as being chosen for support slots with Bob Mould (Hüsker Dü) and opening for The Garden, The Amazons, Inheaven and Pins.

Previous self-recorded releases ‘Brainless’ and ‘False Advertising’ and the Too Pure (Beggars Group) released ‘Give It Your Worst / Scars’, have won praise from the likes of The Guardian, DIY, Drowned In Sound, Line of Best Fit and Clash. Their early recordings capturing the rebellious and youthful spirit of a band carving out their own space.

The trio will continue to release a series of singles throughout 2017, showcasing the result of time spent in professional studios for the first time. However, it’s not all been plain sailing – upon beginning their first session in Abbey Road Studios, the band were told to stop playing because ‘they were too loud’. Instead having to wait to record two full songs in a brief window whilst the studio next door went for lunch.