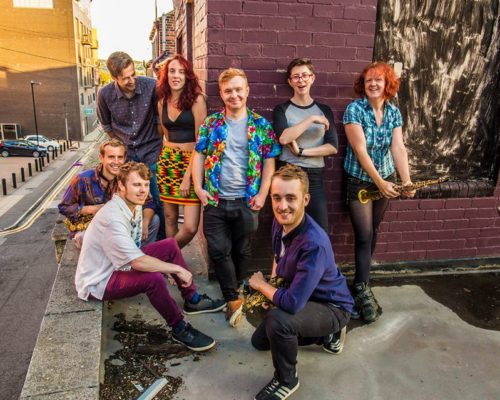 Exuberant, fresh and infectiously energising, Forefathers have been making waves in the Sheffield music scene since 2015. As a 8-piece band, complete with trumpet, saxophones and a multitude of percussion, they offer an eclectic mix of world music combining Afro-Beat and Salsa with Jazz and Funk-Rock.

With sell out shows across the UK and knock-out performances at various festivals such as Tramlines and Y Not, Forefathers deliver that highly sought-after party atmosphere. Their magnetism has attracted a strong and loyal following with their pulsating polyrhythms inducing a unifying dance riot at every show. The band turned promoter’s heads when supporting “Titans of the Festival Circuit” Hot 8 Brass Band and have also shared the stage with The Mouse Outfit, Utah Saints, KOG and the Zongo Brigade, Sonic Boom Six and Mango Rescue Team.

Signed by the Mango Disco label, the Afro-Funk unit rose to critical acclaim from the BBC and gained airtime across local and national radio stations after the release of their first single “Respectfully Sexually”. Subsequently, the EP launch gig sold out and the single “Gentrifination” jumped back onto BBC Introducing within 2 days.

“Fantastic new band on the scene, fresh, talented and lively!”

“Great upbeat stuff from this outfit…..I would imagine one of their gigs is the type of gig you go to and you cant stand still, even if you’ve had a bad day, you just wanna dance!”