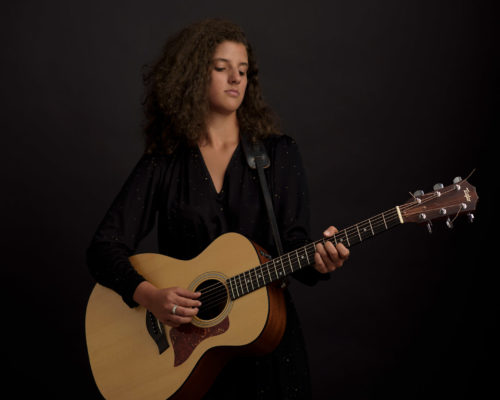 Giulia Tudisco was born in Rome on the 31st March 1997. During her teenage years she grew both as a musician and as a singer, playing different musical genres with various local bands while gaining experience both in live and studio sessions. At the age of 18 she moved to Leeds (UK), where she chose to focus on her own original music and started performing as a solo artist. In January 2017, she met Anglo-Italian musician and producer Peter Leach, and the two started working on Giulia's songs. In March 2017 they started recording her first five-track EP at Leeds Beckett University's studios. The EP was then mixed by Peter and mastered at Woodpecker Mastering Studios in Brescia, Italy. Giulia Tudisco’s “Like Water”, a pop-rock EP with a rhythm and blues vibe, is a collection of different stories and life experiences that carve and shape us into the people we are, like the flow of water from which it takes the name. In summer 2017 Giulia started working with the Italian photographer Filippo Tommasoli, of Studio Fotografico Tommasoli Verona, on the album cover. In the same period, she started collaborating with L'Appeso Video-Production, an Italian video-making collective based in Padua, to shoot her first video-clip choosing the first song of her EP: “I Don't Know”. In August of 2018, Giulia moves to London to pursue her musical career and release both the EP “Like Water” and debut video for “I Don't Know”, which were released in Autumn 2018. "I Don't Know"official video https://www.youtube.com/watch?v=3D2jqhk1xrk Official Website https://www.giuliatudisco.com/ Facebook https://www.facebook.com/giuliatudiscomusic/ Instagram https://www.instagram.com/giulia.tudisco/ Twitter https://twitter.com/GTudisco_Music