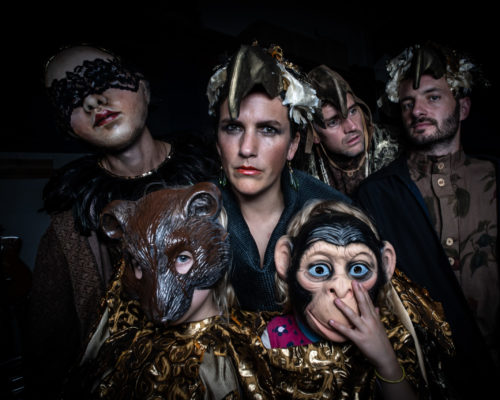 Inventive London folk-punkrock outfit Hunt Us released their debut single “Baby Bird” in June 2018 to rave reviews with support from BBC Introducing in London and independent music bloggers alike. Follow up single “Oaks Pit 66” is a gritty folk-rock account of England’s largest mining disaster in 1866 and was released in October 2018. The self-titled final track from EP “The Ancient Escape” was released in February 2019 and is a rousing post-punk epic which is garnering radio play on both sides of the pond.

Hunt Us was formed in 2016 and is wife Gemma Kirk (vocals/keys) and husband Nicky Kirk (guitar), Richard Nicholls (bass) and Tim Greany (drums). Richard and Tim are not married.

Musical influences are broad and include Lungfish, PJ Harvey, Steve Reich, Joni Mitchell, Godspeed You Black Emperor and Enablers. Releasing their EP “The Ancient Escape” in 2018, Hunt us worked with long time friend and producer John Hannon (Understand, Liberez), to create a debut record spanning the band’s many sounds, which incorporate folk, soundscape, post-punk and experimental.

April 2019 sees the band going back into the studio to create their upcoming release later in the year.