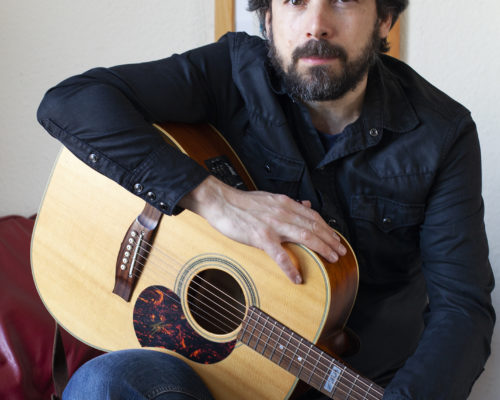 Iago Banet was born in Galicia in the north-west of Spain. At the age of seventeen, having been a music-addict for many years, he found a classical guitar at home and taught himself chords. That year, Banet was given his first electric guitar. Shortly after, he began to form bands with friends and play gigs. Banet formed his first serious band, The Electric Basement Band, in 1998. They played 1970’s rock at venues across Madrid, and were heavily influenced by The Allman Brothers Band. Banet has since played in many bands, recording and touring across Spain. Some of the bands were personal projects: Los Lombardi (Surf music), Los Hermanos Zapruder (Blues Rock), Califa Swing (Gypsy Jazz), Swingtomatiques (Gypsy Jazz) and Michael & Landon (Gypsy Jazz Country). Others, he played and recorded with as a session musician. These included Mr. Dixie (Dixieland Swing), Lou Reyes y los Astros (Rockabilly), Los Mustang Charros (Tex-Mex), Colt 45 (Country), Cristian Escuredo (Pop) and Xiana Lastras (Folk). In 2014, Banet moved to London in search of new avenues, challenges and projects to develop his career. He formed the rockabilly band The Boo-Hoos, and recorded an EP which was the Spotlight on September 2015’s issue of Blues Magazine. The band performed at venues and festivals across the UK. He has also played as session musician on projects including Old Street Blues (Blues) and Karen Grace (Folk), JFK Blue with which he has recorded two albums, Rough Round the Edges and Out of the Blue, amongst others. Banet is currently playing with Deep Blue Sea with which has recorded a live album Live it up, which was featured in both Blues in Britain and Blues Matters. They are currently recording a new studio album. In addition to this, Banet is building his project as a solo instrumentalist, inspired by the work of Chet Atkins and Tommy Emmanuel, and he has just recorded his first album A Sunset Wine, which he is currently showcasing at venues across the UK.