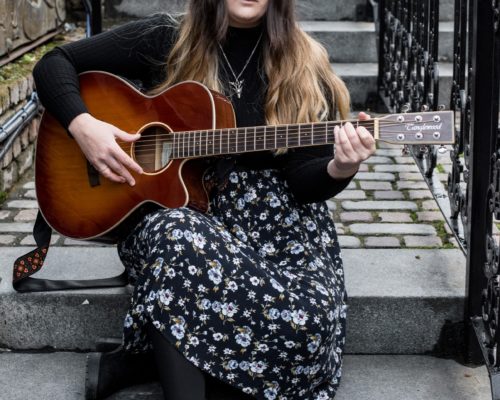 Isobel is an award winning acoustic Singer-Songwriter originally from Salisbury, Wiltshire but now based in London, whose voice and songwriting has been compared to artists such as KT Tunstall and Bonnie Raitt. Isobel accompanies her singing with tuneful and percussive acoustic guitar, citing blues as her main musical influence. She also incorporates folk and country and pop into her music which gives her songwriting an unusual – yet infectious – edge.

Isobel started originally with piano lessons from age 4 and then had her first musical adventure at the Salisbury Blues Jam, playing saxophone at the young age of just 9. A few years down the line, Isobel studied at Tech Music Schools in London and received a HND in Vocal Performance and Cert He in Pop Music Practice. She also went on to win the Tech Music School University ‘Songwriting Showcase’ receiving the award of ‘Song of the Year’ with her self penned bluesy original ‘I wont’. This award meant she went on to perform at the O2 Shepards Bush Empire with a full band for ‘Tech Music Schools Graduation 2012’.
Since then, Isobel has had a wide range of success singing all over the UK and internationally, in venues such as the Colton Hall, Bristol, The Bedford in London and Rampelyset, in Denmark.

Isobel released her Debut EP in 2013, which was recorded with Curved Air Legend, Michael Wedgwood at his studios in Denmark and this received radio interest from not only local radio stations but also BBC Introducing UK.

Isobel can be seen regularly gigging in London, and also the South West of the UK and she has just finished the recording for her new E.P ‘On My Own’ which will be released on the 23 march 2019. The new E.P has been described by Rock-Regenernation‘ as: “a plethora of blues influences as well as a good sprinkling of country styles with Isobel’s fine vocals being the proverbial cherry on the cake.”