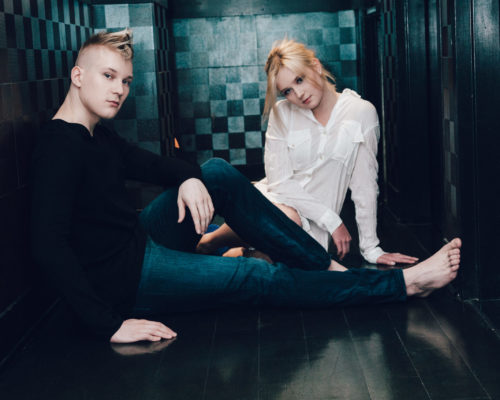 “Embrace difference and be proud of it.” Karel Ullner is a singer-songwriter, producer and guitarist. Karel is accompanied by Singer/Songwriter and Dancer, XoJani. By blending their ideas together, the result is a mix of lyrically thoughtful Pop/Dance/Electronic music.

Karel and XoJani have always connected visual imagery with sounds. The creative process is like reverse engineering; translating the visual pictures and emotions into songs and sounds. The full sound production fills their heads and they get busy transferring it into a recording.

Karel was born in Finland and XoJani was born in Connecticut, USA. They both grew up near New York City. Early on they began exploring music to express themselves. By the time Karel was 12 years old, he had formed several bands and began writing and producing songs, blending various styles of music. XoJani explored dance from Ballet to Hip-Hop where that journey developed into writing original songs and performing around the Greater New York area. True to his values of embracing differences and diversity, Karel also played in heavy metal bands representing members from various crowds and beliefs who came together through music. Karel also toured and released a solo EP as a rock artist, Nordic Fury.

Today, Karel and XoJani have collaborated with many talented artists. Their influences include Michael Jackson and Skrillex with similar artists being The Chainsmokers, Krewella, and Zara Larsson. Karel performs singing and playing guitar, while DJing, shifting between upbeat and sensual electronic atmospheres and beats, creating an exciting dynamic display. They believe in exciting self expression and collaboration via beautiful sounds and visuals, along with the message. Their thoughtful lyrical themes are diverse, exploring themes from wild parties to feeling lonely, or yearning.

Now based in London and New York, we are excited to share our new music with you. Enjoy!