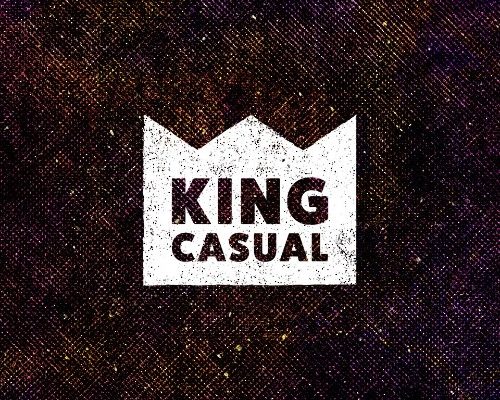 King Casual was formed at a method acting school in East London as part of a university competition to write a folk song, which Jamie, Benny and Tito wrote to such popular demand that it inspired them to turn the song into a band. Influenced by classic folk artists such as Stan Rogers and Bob Dylan, King Casual have experimented with sound, rhyme and meter ever since that fateful day in 2012.

King Casual’s chilled, funked up alt-folk dips into reggae and soul before resurfacing nonchalantly, casually with is own bouncy groove. The musicianship is clear to hear. Guitarist Tito Cousens’ first instrument was a flute he hand-carved from a piece of wood, he later began teaching himself the guitar and bass guitar, experimenting with psychedelic rock and acoustic styles inspired by John Gomm and Andy McKee. Bass guitarist Chris Jackson is also a jazz pianist and guitar virtuoso, who also produces electronic music under his own name. Drummer Kieran Edwards plays brilliantly in pretty much any style. He has developed a unique path as a drum and bass percussionist as well as a reputation as a “play anytime, anywhere” musician. Co-lead vocalists Jamie and Benny come from a theatrical background. With an instantly recognisable tenor voice and a comedic presence on and off the stage, Jamie tours regularly as part of Musical Theatre productions.. His funky style is informed by acts like Vulfpeck and Fat Freddy’s Drop. Benny developed his recognisable vocal style singing in church choirs. As a teenager he immersed himself in the UK roots reggae culture, eventually joining a Soundsystem as their MC and releasing tracks as a solo artist.