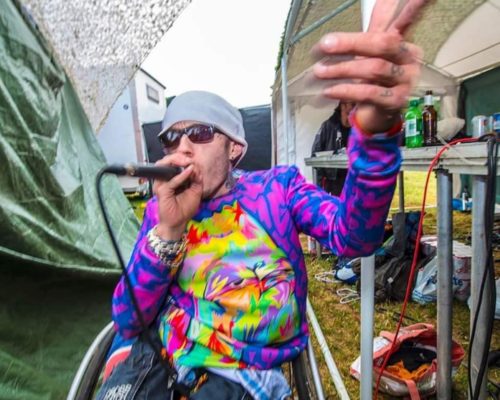 Kray-z Legz is an independant rap artist with over 200,000 streams on Spotify alone, he has worked with producer anno domini who has produced for the likes of Eminem, Wu tang clan, Usher and many more superstars, also Legz has collaborated with uk rap star Benny Banks and Jman and Laid Blaks DJ Bunjy.

Legz is a rap artist with an impact as he is a fulltime wheelchair user but don’t let this fool you as he brings back the original 90s hip hop vibes from when music was at its best!! His talent stands alone and is a powerful way to spread his message that disability doesn’t have to prevent anyone from achieving there dreams in life!!!

Last year he also performed at Grinagog Festival in Torquay and twice at the notorious Boomtown festival, he was also flown to perform at The International Sage Arena in Gateshead, Newcastle. He also hosts at a large number or club events all around the UK.

I have had support from the BBC Ouch Blog and the introducing team who aired 1 of my tracks ON A ROLL.