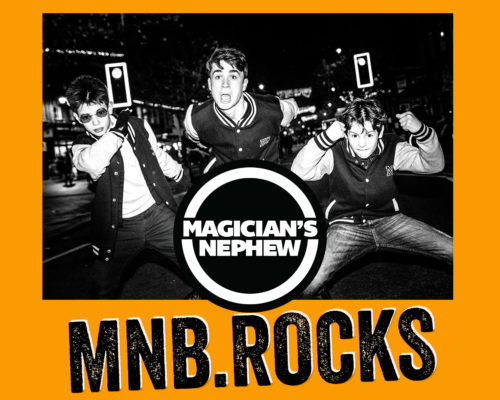 The next big thing, but bigger!

Magician’s Nephew are a young power rock trio from North London who continue to amaze audiences with their talent, energy and passion for rock music.

The band’s plethora of original songs and witty juvenile lyrics, combined with grown-up, in-your-face, guitar riffs and roaring sounds, have immediately caught the attention of BBC Introducing, local radio and stunned crowds on an impressive gig and festival track record under their belt.

Drawing influences from Hendrix to the Stones, 2016 saw the launch of their second album ‘Young Enough’.
A busy 2017 has seen the boys display their adrenalized high energy live performances at festivals and venues across the UK to great reception and acclaim with the band blasting full steam already recording their third album and planning their 2018 UK tour.

They write, record and help produce their own songs and deliver amazingly energetic performances.

In an era in which mainstream-music machine sterilises millennial musical creativity, could the emergence of Magician’s Nephew spell the much needed return of the Rock Band?

Please check them out on the links below: