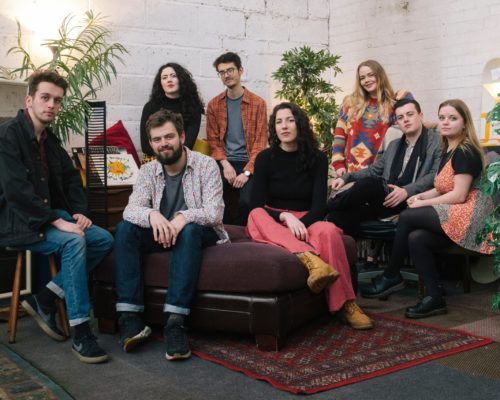 Mamilah originated in Leeds in early 2017, amongst a group of musicians from all corners of the UK and Ireland. Their awareness of the commonly misused umbrella term Neo-Soul for any modern R&B/Soul sparked the Mamilah flame, a flame that strives to exude a more traditional soulful blend. Inspired by artists such as Judith Hill, Stevie Wonder, Nubian Twist and Aretha Franklin, they bring a fresh twist on what it is to be soul.
Since their inception, they have played in Leeds most reputable venues such as the Belgrave Music Hall, Smokestacks, The Brudenell Social Club and The Wardrobe; alongside Leeds heavyweights Tetes de Pois and Necktr, Manchester groups Agbeko and Children of Zeus, and most recently London Afrobeat legends KOKOROKO. After their debut London gig at Camden Assembly in April 2018, they enjoyed many tour dates around the UK in Summer and Autumn ’18, with gigs culminating with a Dat Brass support slot in December. They also enjoyed a summer playing various festivals such as the BBC Introducing stage at Long Division Festival and Manchester Jazz Festival. 2019’s summer season sees them set to play to play the Floating Lotus stage at Boomtown Fair, and Virgo Festival in beautiful Devon.
Their debut single release Sundrips is a powerful ballad that brings back nostalgic Soul inflections whilst maintaining a fresh and organic sound. The debut EP Moonlight Walking’ was released on August 24th 2018 and packs in as much solid soul as possible in 4 songs. Having received positive feedback from the likes of Alan Raw (BBC Introducing West Yorkshire) and also being picked up by Bandcamp on their Best of Soul August 18 Article. “The jazzy, 70s-style instrumental production on Moonlight Walking is strong enough that it could stand on its own, vocalist-free, but thankfully it doesn’t, because singer Lydia Kotsirea commands the four-track EP from beginning to end”- Bandcamp Daily.