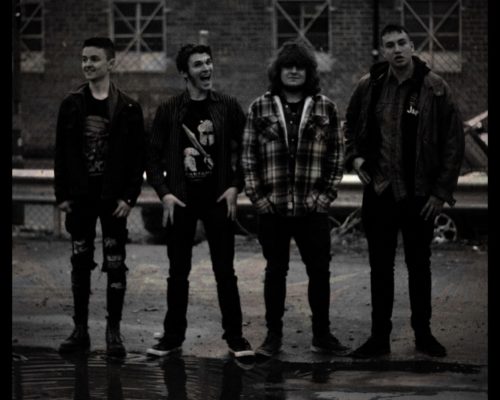 Mandalorian started as a classic rock covers band in 2014. After years of cutting their gigging teeth in dingy bars, one show went tragically wrong when the stage was invaded by 24 acolytes of an old religion, clad in grey robes, who ritualistically disembowelled the band's only fan in a sacrifice to an otherworldly force. Feeling pretty put out by this, they decided to break up as a band after their next show. However, some of the gore and viscera from the sacrifice had splashed onto one of their guitars, and so at the next practice session, after a particularly tasty Emb11, a portal to the 7th dimensional hell plane was opened up. The band saw the true face of the universe, and their place in it, and how the world will come to an end, and the eternal plight of the great lizard who wields the multiverse-bifurcating sword.

They put their new knowledge of humanity's inevitable demise onto tape with Machetezilla! …and Other Tales of Terror, their debut EP, released in 2018. They continue to experience horrific flashbacks to the time an interdimensional portal opened up in a practice session, and hence are on track to release a full album by the end of the year.

They also continue to gig, playing live shows that have been described as "organ-vibratingly loud" and "more enjoyable than the last cosmic-horror themed rock band I saw."