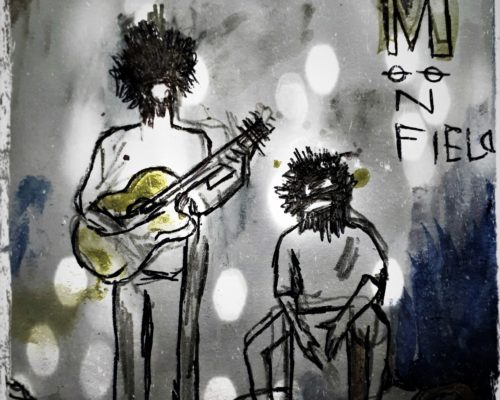 This is Moonfield…. Everything else is popcorn!!!!! Well, popcorn has something to do with it, but not much. We pushed popcorn for half a living. That’s where we met. Under bright neon with the smell of sugar and salt. Two people who always loved the same idea, but never quite got it together on their own. Open minds. On a train out from London to Gravesend. Leaving the last lights of the city behind, Somewhere there, began the process of catching the dust where Heavy Speed Thrash Metal collides with Country Folk, a didly-eye and the odd Kumbaya. I guess that’s in essence what you’re hearing, created with love for the music, openness respect and compromise, and with let’s face it, the odd row thrown in. All the things that pretty much need to happen when you’re creating something, Most of this stuff comes from two grumpy blokes, sitting in a room, getting slowly drunk together. One night, one asked the other. “Why don’t we write any cheerful songs!”….the reply…”because mate, we’re like…not cheerful”….We see the world through similar eyes a lot of the time. But we are determined to bring JOY!!!!! Come get on board, and sing a suffering song!