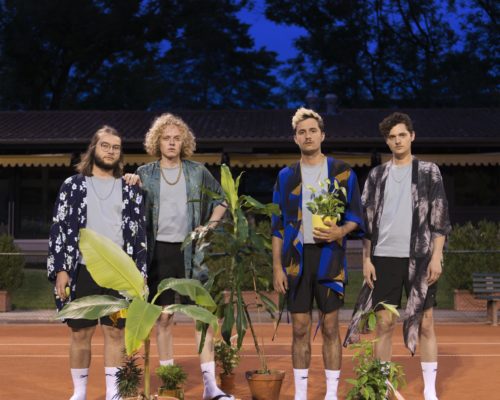 Quintessenz (Andrin Haag, Colin Lanz, Allan Loew, Yannick Bellotto) released their debut EP “V” in January 2016. It was recorded, produced and designed in its entirety by the four musicians.
Shortly after winning the „Imagine Bandcontest“ in June 2016, Quintessenz received major attention in Northwest Switzerland and grew their fan base through numerous live performances and radio appearances.
Their second EP „Ellipsis“ charted at number 18 in the national album charts in April 2017.
After playing more than 60 concerts within just two years, Quintessenz left their hometown with a reputation of the most booked newcomer band.
After having moved to the UK for their studies at BIMM London they have recorded two singles with Pete Smith (Grammy-award winning producer for The Police, Joe Cocker, Stevie Wonder i.a.). Their first album single “Stress” (prod. by Smith) was followed by further single releases promoting their album launch of 10 January 2020. Their debut album ‘less than three’ is an oeuvre Quintessenz have elaborated for almost two years and that now makes the musicians tour through Middle Europe. With gigs in cities such as Berlin, Hamburg, Vienna, Prague, Zurich, Basel and of course London, Quintessenz hope to spread out their art in more than four countries.