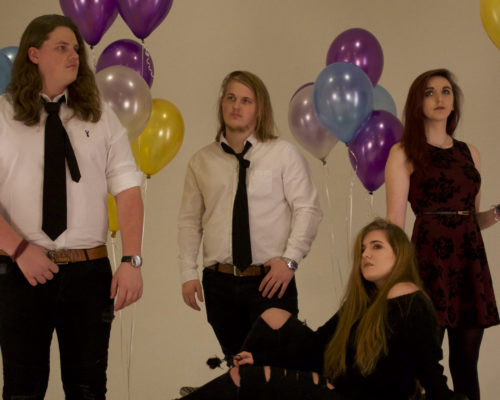 Saints Among Us are a female fronted alternative rock unit hailing from South Yorkshire. Expect a stadium worthy sound with room filling synth lines, riffs, vocals and electronics resulting in a huge dramatic sound. A mixture of stunning guitar riffs, hooky vocals and dramatic song writing puts Saints Among Us at the forefront of female fronted alternative rock bands within the UK. Experience a stadium worthy sound with influences from bands such as 30 seconds to mars, Young Guns, You Me at Six, Slaves (USA), Bring Me The Horizon. SAU take what is normal and acceptable with the Alt-Rock scene and flip it on it's head to create their own original sound which will be hard to replicate elsewhere. SPOTIFY: https://open.spotify.com/artist/2MdCtf4VkMw1GNi5RrvPyo || PRESS || "Broken World is far and away one of the best things I’ve heard all year, and I shall be going back to it continually just for how much depth there is in this outstanding EP" – [RGM – Reyt Good Music Magazine] "[Saints Among Us] have really upped their game with their last two tracks. [Saints among us have so much potential ahead of them!" BBC Introducing Sheffield | Christian Carlisle "I love that release, it's called home. It's a good upload [that]…" BBC Introducing Humberside "…worked over meticulously for some time, something that would be expected of a much larger scale gig, maybe even that of an arena…… From the very outset, the crowd was gripped with suspense as synths filled the venue, gradually flowing into their first original song of the night, the heavily anticipated CRIMINAL….. Big things are to be expected from Saints Among Us this next year as they keep the ball rolling into 2018, with fans clamouring for gig tickets, just as they did for this one…." Northern Exposure "Saints Among Us new single Criminal shows off what modern day alt rock is all about. In recent years we’ve seen the genre of rock begin to resurrect in the keyboard and piano influences. A far cry from the hard and heavy sound of current eras, Criminal lays down the synth as a foundation to work off. With a hypnotic sci-fi siren worked in throughout the track, and guitar work that is top notch when it steps up to carry the track….. I definitely feel as though Saints Among Us have a ways to go in developing an identity. Criminal could come off as a little generic to some and sound great to others, my point is it’s on the cusp of being something special…" – Reyt Good Magazine (RGM) – – – Awards: Hull Star Search – 1st Place Yorkshire Gig Guide Outstanding Artist / Band – 1st Place Yorkshire Gig Guide Outstanding Emerging Artist – 2nd Place