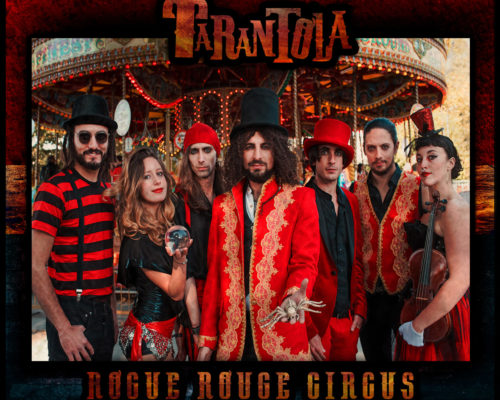 Hailing straight from the boot of Italy, Tarantola is a Mediterranean Gypsy-Folk band that brings "Taranta", the traditional music of Salento to the British music scene. 6 energetic musicians who come from different corners of the world including Italy, Spain, Brasil, Cyprus and England who share their diverse musical influences with captivating circus performances exclusive for their upcoming album entitled "Rogue Rouge Circus", containing 5 singles that will be released one by one monthly from next January in 2019. Each song is an episode of an intriguing and provocative story about all the mysteries, relationships and adventures behind the circus curtains, which you can watch and follow in the next live shows starting from April 2018 You’ll hear authentic tambourine rhythms grooving with enchanting whistles and violins, reminiscent of the circus, the sea, the tradition, the legend and the mysticism belonging to "brown skin people"of the Mediterranean lands and their way to influence and be influenced by many different cultures. Tarantola will be touring in England, Italy and Spain for the entire 2018/2019. You'll enjoy a perfect communion of wild gypsy music with breath-taking circus performances. Tarantola bites her victims and steals their souls, making them dance without rest in a unique live show. ​ "The circus is Life, the Circus is you"