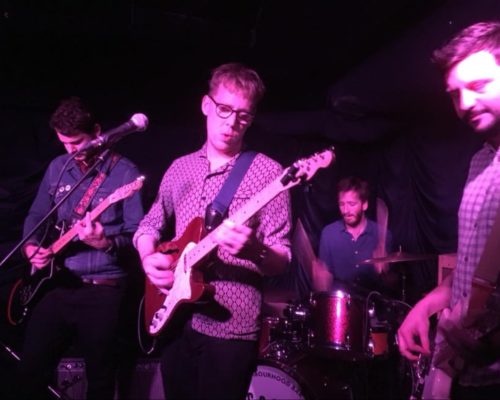 Thou Swell is a new indie-rock four piece based in North London. Formed by school friends Will Derbyshire and Andrew Almond, Thou Swell played their first show in November 2017 selling out the seminal venue Aces and Eights in Tufnell Park. Following this triumphant live inauguration more live dates have been played including a second headlining slot at the legendary Fiddler’s Elbow in Camden in February, and shows at 93 Feet East and The Water Rats. As such the band is gig ready, at the top of their game and writing new material consistently.

The band consists of 2x guitar, bass, drums & vocals and plays guitar based rock which mixes indie pop classicism and psychedelia. Whilst his might sound idiosyncratically unique, it makes for a thrilling live spectacle. Currently the band’s set list stands at roughly 45 minutes in length, but given the prolific nature of the band’s creatively is likely to increase this over the coming weeks.