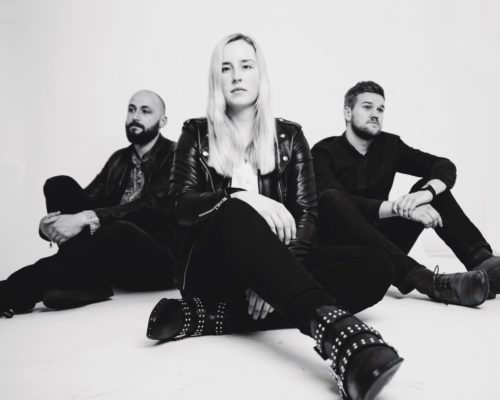 Their debut EP Inventing Lives was released in 2018 to rave reviews.

“TIDES have pulled out all the stops to craft and nurture an EP furnished with stadium rock melodies, hard-hitting, thrashy guitar riffs, and poignant lyrics from the ever-captivating woman who fronts it all, Evelyn May.” – Ellis Shelton, Hot Vox Blog

The band followed this up with their single You Know in April 2019 and Under This Sun later in July, which were played on Planet Rock Radio UK and Radio Free Brooklyn in the US.

TIDES always ensure to give an energetic, sweaty and loud performance. The band aims to never write your standard 4/4 rock song, incorporating many unexpected time and feel changes in their signature writing style.

“TIDES live set is tight, the musicianship is strong and the songs are carefully constructed.” – Darren Iliffe, Loud Enough? Magazine

Formed in London in 2015, TIDES have since worked hard to pay their dues at many of the UK’s most well-known and significant venues for supporting up-and-coming bands and artists, a number of which they have headlined. The band is going from strength-to-strength and will continue to use this momentum to capture the interest and attention of new, broader audiences in the UK and internationally.