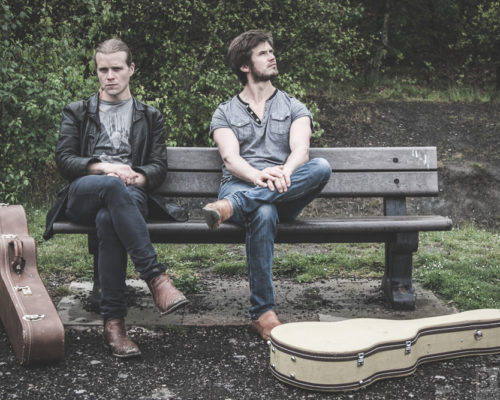 Brothers Alex and Rolf Tinlin are a songwriting partnership whose emphasis lies firmly in the production of original and honest, yet well-crafted music. With an eclectic mix of both classical and contemporary musical influences, Tinlin incorporate a unique instrumentation of acoustic guitars, mandolin and percussion, intertwined with bold vocal harmonies.

Reviewers have made various diverse comparisons ranging from Neil Young, The Beatles, Turin Breaks, Simon & Garfunkel, Peter Gabriel-era Genesis, and Crowded House. Although one must acknowledge these comparisons, they are eclipsed by the distinctive Tinlin sound.

Tinlin released their first official studio album ‘Shade of the Shadows’ in September 2012; songs from the album received fabulous reviews when performed whilst supporting former Squeeze and Mike & The Mechanics frontman Paul Carrack on three UK and European tours, which included a sell-out show at the Ipswich Regent Theatre. They have since gone on to support 60’s legends The Zombies, and legendary folk group The Strawbs on their 2013 UK tours.

More recently, ‘Notes from the Road’ was released in 2014. This ‘live’ album of songs was recorded whilst on tour with Paul Carrack.
In July 2014 Tinlin opened Day 2 at the Hop Farm Festival ahead of Moya, The Noisettes
Squeeze, James Blunt and Brian Wilson.

Tinlin have just completed their new studio album, titled ‘Strangely Blue’ under the watchful eyes (and ears) of producer, Tom Toomey, guitarist with The Zombies.

Tinlin will be touring small theatres and arts centres throughout 2016 and 2017 to promote their new album.