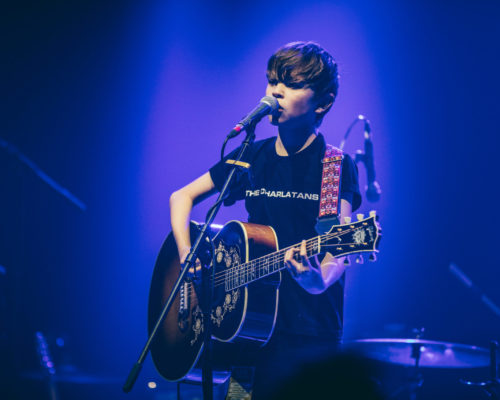 Tom Smith is a 13 year old Singer Songwriter from County Durham. Now with almost 20k Facebook follows he is a formidable social media presence. Already an accomplished guitarist In his short career he has supported Shed Seven, James Bay and Catfish and the Bottlemen (three times) and Madness. Last winter he supported The Charlatans on tour and is the youngest ever performer at The Great Escape, Festival No.6 and Kendal Calling playing entirely original material. He has also supported Frankie & The Heartstrings, John Power from Cast and could be found jamming backstage with James Bay at T in the Park. His appearance at The Fluffy Rock Cafe at Glastonbury Festival resulted in him being described as one of the highlights of the Small stages alongside Billy Bragg and FFS. He has also won last years Child of Acheivement at the north east press Best of Wearside awards. Tom also appeared on the charity recording of The Beatles classic Help! In aid of Syrian refugees alongside the cream of the North East Music Scene and again he stole the show and recently recorded material at Peter Gabriels Real World Studios.

He has achieved so much in such a short time whilst living with the life limiting condition Hypoplastic Left Heart Syndrome which means he was born, and continues to function, with only half a working heart.