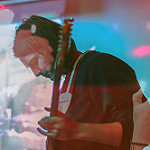 Having risen out of the ashes of Naked Lights in early 2017, South London Band Tugboat Captain transform intimate bedroom indie-folk into anthemic, wild and chaotic live shows. Rotating band members and wide instrumental variation give each show something totally unique and with a rabid and dedicated fanbase the band have already established themselves as a refreshingly unpredictable live experience. With one album under their belts and a new one already on the way, the band are already garnering comparisons to as wide a range of artists as Elliot Smith, Guided By Voices and Fat White Family.