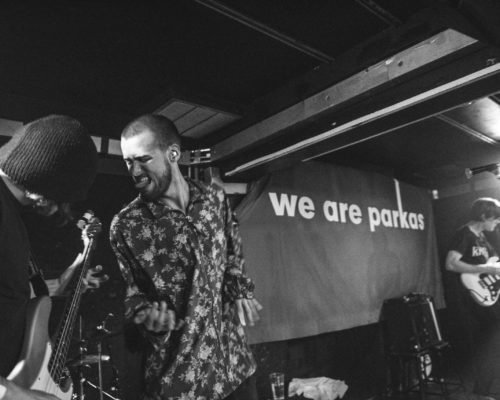 We Are Parkas are the grit, guts, and passion that is missing from modern day indie music.

Matt Banks (vocals), Owen Stephens (guitar), George Hopkins (bass) and Joe Strauss (drums) have been writing and gigging constantly since 2015, perfecting their arena sized sound and firmly establishing themselves as the South West’s most exciting prospect in indie rock.

They take inspiration from the greats. Namely the Arctic Monkeys, The Jam, The Strokes, Red Hot Chilli Peppers and others of a similar vein. With towering riffs, soaring melodies, and palpable charisma their live show is a refreshing injection of pure solid energy. It must be seen to be believed.

Their debut EP titled ’We Are The Gods’, was released on all major platforms on March 23rd, and their single ‘Penny Drop’ was released December 11th with an accompanying music video released on August 24th. You can listen to their latest single ‘Catch Me Out’ via the link below.

‘We•Are•Parkas are one of Bristol’s most promising bands. Convicting, intense and uptight indie delivered with a Gallagher swagger and lashings of rock and roll like it should be.’ – Reuben Myles, RMT Productions.”

‘’Think mid 00’s indie-golden era. There is a definite influence from likes of The Fratellis and Razorlight in these tunes, with the title track ‘We Are The Gods’ sounding very Two Door Cinema Club to me at the start. However don’t let that take away from the exceptional songwriting in this record, with the lead singer’s outstanding voice making it all sound completely original.’’ – Sean Wise, Spice UK