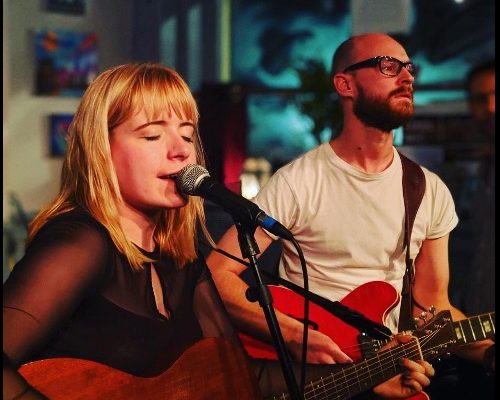 Today’s playlist is curated by KHASHOGGI

Khashoggi is a duo based in London, formed by songwriters Jessica Craig and Michael Webster. Channeling diverse influences with nuances of blues and folk, they deliver an edgy and soulful modern sound. They released their debut album ‘Run on Repeat’ in 2019 and are currently writing new material.

WANT TO HEAR MORE? To see the premiere of Khashoggi’s “Listening Party”, head to hotvox.co.uk at 7pm on 9th March

Filmed in full HD, “Listening Party” allows you to enjoy the intimacy and authenticity of a live show, from the comfort and safety of your own home, ensuring that your experience as a fan is as close as possible to the show you’re used to seeing from your favourite artists.

Song from the first album you ever bought/listened to?

The first album I really remember hearing all the way through is Guns N’ Roses’ ‘Appetite for Destruction’. I’ve gone for ‘My Michelle’ which has one of the all time great opening lines.

I was obsessed with the Spice Girls growing up and loved this album. If I’m being honest, I still love this song now!

This was a tough one but in the end I’ve gone for Rainy Night in Soho by The Pogues, written by the great Shane MacGowan who far too many people only know for Fairytale of New York.

I’ve always been a Pulp fan however over the years, my appreciation of this song has grown more and more. All hail Jarvis Cocker!

Michael: The Beatles – Here, There and Everywhere.

This song was written by Paul McCartney and I’m obsessed with it. It always inspires me to write every time I hear it, the piano part always gives me goosebumps.

The last album I bought was Elvis Costello’s new one ‘Hey Clockface’ so I’ve gone for the single ‘No Flag’ from that. I could quite easily have filled most of this list with Costello haha!

This song is from the Gorillaz’ latest album, ‘Song Machine, Season One: Strange Timez’ and it’s SO good! I’m a big fan of Damon Albarn and this entire album is awesome.

Michael: AC/DC – Girl’s Got a Rhythm

I remember my dad having the ‘Highway to Hell’ album in his van when I was a kid and this was track 2 off it, you don’t hear it very often so it always reminds of being in the van with him. Plus Angus Young was my first guitar hero!

Jess: Ace of Base – All That She Wants

This song reminds me of the early 90s in every sense, as soon as it starts I’m transported back to childhood. Such a classic tune too!

For some reason I always sing fairly morose or deep songs in the shower so Leonard Cohen tends to feature a bit!

I have no idea why but when I’m in the shower, I always try and attempt to sing this. Focusing particularly on Ella’s improvisations which are no easy feat!

Queen is one of my favourite bands and I remember this being the first track on a random compilation album I had when I was young and absolutely loving it.

I remember hearing this song and seeing the video for the first time, I just kept thinking, ‘Wow! I want to be a singer’.

Michael: Eddie and the Hot Rods – Do Anything You Wanna Do

Yep, this track is the perfect accompaniment for getting ready to go out. Love it! Also a punk banger I suppose!

The song do you put on repeat if you’ve just had your heartbroken?

Just one of the most beautiful written songs ever, everything about it is perfect.

A lovely song to listen to when you need a good cry.

This is off Little Mix’s latest album which is genuinely helping me get through lockdown.