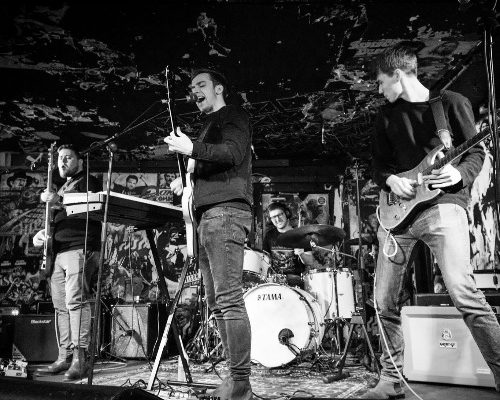 WANT TO HEAR MORE? CRUX is taking part in RISING, our brand new series of live-streamed events, which aims to support and raise money for War Child UK to assist their work during the Covid-19 crisis.

Tune in to see CRUX streaming live on Saturday 16th May at 6.00pm

Who are CRUX? Where you’re from, how you met, how long have you been playing together etc

Max: Crux are an alternative rock band from Newcastle. We originally started as a sixth form band way back in 2012, which involved myself and Jake. We mainly did covers then, but we all went our separate ways to university after school in 2014; Jake and I wanted to keep the band going still, so we encouraged/forced our good mate Elliot to learn the drums, where we started practicing originals and a few covers too. We soon realised we probably needed a full time bassist, as it wasn’t sustainable for me and Jake to swap instruments after every song. So Jake, went around a few university groups on facebook asking if anyone fancied joining the band, to which Hallam responded, and Hallam and I bonded over our love for Muse immediately. We started gigging late 2015, and have since played numerous local festivals and even released a single titled ‘Bigg Market’ after the infamous party street in Newcastle city centre (Shameless promo edit: it’s on spotify, itunes, etc.). Since the start of this year, Elliot’s work schedule has become increasingly demanding, so we’ve also recruited a session drummer, Joe, to help out on the skins when needed.

Hallam: The story goes that when Max was looking for a new band name he flicked through the dictionary until he found a word that stood out to him.

Hallam: We all have our own main influences that we bring to our instruments, writing process and production. Those influences overlap in a few main artists like Muse, Radiohead, Arctic Monkeys, and Rage Against the Machine, as well as other genres like classical, metal, hip hop, and prog rock.

Max: Muse are probably my all time favourite band, but at the moment I’d say Dutch band, De Staat, are my biggest influences. But my influences seem to change every few months, depends what I’m listening to!

Hallam: We recently recorded our new singles in London. One at RAK Studios with producer Jim Lowe, the man behind Dakota by Stereophonics, the other with Max Heyes at Lynchmob Studios, who has worked with Bloc Party and Doves, just to name a few. We have had the pleasure of headlining at O2 Academy 2 in Newcastle, and our latest music video Bigg Market has seen great success online. As a band we’ve met our share of musical heroes too, like Royal Blood, Sam Fender and members of Muse.

Max: So stay tuned to our social media, as those new shiny singles will be released once lockdown is over (more shameless advertising from me).

Hallam: Generally, we’re all coming up with riffs or chord progressions in our own practice times, and then we send each other snippets of what we’re working on. When we get together to practice we jam out some of the new things, try different instruments or arrangements and see what we like. Sometimes one of us will arrive with a full song and we write our instrument parts around it.

Hallam: Each of us would probably say a different band, but I think we could all agree on Muse. Since Crux’s inception we’ve drawn heavily on their influence, covering their songs, jamming our favourite Muse riffs, using lots of bass distortion, guitar fuzz and classical piano elements in our original compositions.

Hallam: Again, each of us would have a vastly different line-up to the others but I’ll speak for myself here. I would have Gavin Harrison (formerly of Porcupine Tree, currently of The Pineapple Thief) on drums as I think his technical knowledge and ability makes him one of the greatest drummers on the planet. On bass I’ve got to say Flea (Red Hot Chilli Peppers), because well, he’s Flea. On guitar it has to be Guthrie Govan (The Aristocrats) because he defines virtuosity. On vocals, I’ll say Maynard James Keenan (TOOL) because I love the power in his voice. I have no idea what this band would sound like but man would it be cool!

Max: Mine would probably be… Neil Peart (Rush) on drums, I’m still heartbroken that he sadly passed away earlier this year, rest in peace. Les Claypool (Primus) on bass. Tom Morello (Rage Against the Machine) and John Frusciante (Red Hot Chilli Peppers) on guitars. Shara Nova (My Brightest Diamond) on vocals. Matt Bellamy (Muse) on piano. Now I’m starting to get out of control with this imaginary band but Torre Florim (De Staat) on synth, and Jonny Greenwood (Radiohead) could conduct some strings to go over the top.

Hallam: Loud. We don’t take ourselves too seriously and we love to be silly and have a laugh during a gig so hopefully we’re fun to watch as well.

Hallam: It sounds boring but we just practice. Nothing else is going to have anywhere near as much of an effect on our performance. Post-gig we always stick around to watch the other bands performing on the night. We know from experience that there’s nothing worse than the other bands’ crowd clearing out after them, leaving you to play to fewer people. We’re big believers in supporting other local bands.

Hallam: I’d probably say an Xbox with some Call of Duty or some FIFA to get the lads pumped for the gig, with padded walls in case Max throws his controller… like a diva.

Max: The first concert I ever saw was the Scissor Sisters at Newcastle’s Utilita Arena (formerly known as the Metro Radio Arena), I still love their music, ‘Laura’ and ‘Filthy/Gorgeous’ are absolute jams. If you find me at a karaoke, I’ll be blasting out ‘Angels’ by Robbie Williams too, love a bit of Robbie – I used to listen to him in the car with my mum all the time on the way to school. All of us all love Coldplay, and even though it seems to be the ‘cool’ thing to hate Coldplay, we’re not ashamed to say we really enjoy their whole discography.

Joe: Metallica – So What (not the song but the lyrics)

Jake: Jonas Brothers – What a Man Gotta Do

Max: That reminds me, I love Lovebug by Jonas Brothers

Hallam: That we practiced 2 hours, 3 times a week, every week for a year before we embarked on our first ever show. That’s a lot of loud music for Max’s parents to put up with!

Hallam: We’re on all social media platforms, we’re most responsive on Facebook, and our music can be found on Spotify and YouTube. And we have our own website now too: https://crux.band/

Max: Hopefully make a career out of the thing we love doing the most: making music.

Hallam: We’ve got new music on its way, as well as more music videos and some lockdown content for your viewing pleasure, so stay tuned!