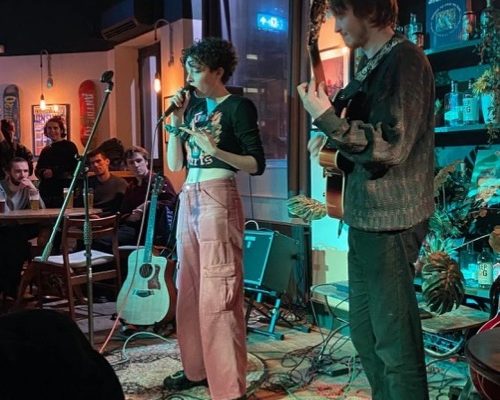 Hombres in jazz and also life for a good many years, Frank and Max are a jazz duo hailing from the great border cities of Carlisle and Darlo. They write tunes combining an improvisational feel with poetic lyrics, as well a bit of cheeky Northern wit tossed in and what is perhaps tmi about Frank’s love life.

We also thought it would be a great idea to do a pop quiz with you guys so fans can get to know you as the support and help with promoting the event to your own audience as well. I’ve included the questions below, please return your answers to us before 12pm on Wednesday so we can get the article written up! Feel free to remove anything that is irrelevant and add anything you think might be of interest.

Who are Frank & Max? Where you’re from, how you met, how long have you been playing together etc

Frank: Frank & Max are two absolute legends from the Northern borders – we jest. Max is from Darlington.

Max: we met a few years back United by a love of skanking and cans.

Frank: It’s pretty much just our names. Although I legally change my name every few months so…

Frank: We’re both massive jazz heads. Max probably more than me. I like a bit of dreampop/bedroom pop too although in my downtime I tend to listen to 80s/90s bangers and Trap Queens like Bbymutha and Rico Nasty.

Max: all sorts of influences really, massively love robert glasper and that whole scene all the stuff going on in london right now. I also love the kind of harmony you get in liquid drum and bass – that pops up in our stuff pretty constantly.

Frank: I think we’ve both done some quite impressive gigs – I’ve played at Southbank and Pizza Express Soho which was fun. I think having a hotel room booked for me was when I was like yoooo incred. I played with Thundercat at a jam once too.

Frank: It’s very collaborative. Max is better at the technical harmony and I do the wishy washy feelings stuff. We’ve got our process down quite nicely now – I have a lovely attic room and we tend to chill after work and just make tunes. Lots of voicenotes and a very glamorous spreadsheet.

Max: we do all sorts really! Go back and forth on stuff, negotiate and figure it out together!

Frank: I would go on tour with maybe Louis Cole because he’s insane and I reckon it’d be a laugh, or ooh HANDS DOWN Tyler The Creator – he’s a genius. And his comedy bangs.

Frank: Thundercat, Steve Lacy, Max obvs, then some of the old jazz cats probs like Miles and Monk. Idk. Santana’s drummer just for jokes. The notorious B.I.G. JD Beck and DOMi but just on the triangle or something. A lot of our friends too tbh – do I have to pick one line up?

Frank: As I said in a live show once, ‘caffeine addiction, mental illness, more than anyone ever asked to know about my love life’. Intimate vibes and the shadow of my dark musical theatre past. Sick-ass gee-tar from my bro.

Frank: Just like general mental and physical wellness stuff really. I like to plan my outfit and go over the set – once I’ve winged my eyeliner I’m like ‘right you mythical bitch, let’s do this’… Ooh also I like to get a double G&T to sip throughout the set. I guess that’s one.

Frank: I’m already accused of being a diva and I encourage this.

Frank: I’m unashamed to say I love sugary noughties trash – like the type of stuff you’d hear in the intro of Legally Blonde. Also, one of my top listened-to artists last year was Deadmau5. I love a bit of terrible noughties trash.

Max: probs angels by Robbie Williams- hard to argue with

Frank: We’re both virgins. Max is going to delete this I can tell.

Max: I will let it slide

Frank: Our instagrams! Mine is @2bfrank___ and Max’s is @maximumgoodall because every part of his name is a word of its own.

Frank: We’re very much just cutting our teeth – I’m very keen to get signed to an Indie label, and we’re also in the process of putting together a small band lineup. After the couple of shows we’re doing we want to look to record, too. Thanks!