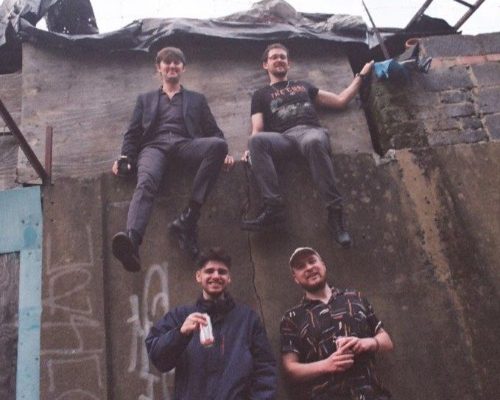 Who are Happy Science? Where you’re from, how you met, how long have you been playing together etc

We met in North London. It was our shared passion for music and production that brought us together. Everyone in this band is a songwriter and a producer in their own right. We all had aspirations to not be another band that simply stands on stage a thud’s their guitar strings; we’re passionate about making music that will live forever in people’s minds.

We have our own little corner of Alexandra Palace where we right and demo songs. Fin, our drummer has a studio there, so we’ve been fortunate enough to have a space where we can go and churn out song after song.

We got together as a band and started writing songs only a few years back. We were due to launch the band in early 2020 and had lined-up a raft of shows but like everybody else in the world, were affected by the pandemic. So instead, we spent various lockdowns and periods of isolation writing and recording. This left us with a an array of song we’re very proud of.

We finally launched the band this summer with a sell out show at the beautiful Shacklewell Arms in Hackney.

That would be me (Dan). I was obsessed by Brian Jonestown Massacre and, in similar fashion, was inspired to name a band after a cult. I started researching cults and getting myself stuck in 2am YouTube wormholes until I found this odd cult in Japan called Happy Science. They have been called Japan’s strangest cult and believe in weird UFO conspiracies. Oddly enough, I was hanging around in Soho a few months back and was handed a flyer from someone representing the UK faction of the cult. Strange times.

Carl Barat cut his finger while playing my guitar once and I never washed it.

In all honesty, there isn’t one. I write songs whenever I feel them coming on. If I’m at my home studio, I’ll quickly record an idea to Pro Tools and try and build a full song around that. Often, it can be just an acoustic guitar and a Dictaphone. Sometimes it can be just me and a bass guitar. Me and Calum will often bounce ideas off each other too.

With the last single, ‘Future Vertigo’, Calum brought that song to me a while back. I remember listening to a very rough demo while in Aldi in Archway and instantly thinking “that song is the next single”. We demoed it very soon after and that formed the basis of what you hear now. The guitars are very Velvet Underground ‘Heroin’ inspired; along with those primal drums that pulse over and over like a heartbeat. The last part of the tune picks up and takes it to another stratosphere.

Parquet Court. The connection they have with their fans is incredible. The term ‘cult band’ is thrown around far too often these days but they don’t even have a single social media site. It’s a pure band to fan relationship and that comes across so beautifully in their live shows. Who wouldn’t want to tour with a band like that?

A glorious festival of noise and love. Connection with the audience is key and that’s what we do best.

Calum disappears and no one in the world knows why. Christian does burpees. Fin naps and hold it all together.

I used to be a professional footballer until my very early 20s.