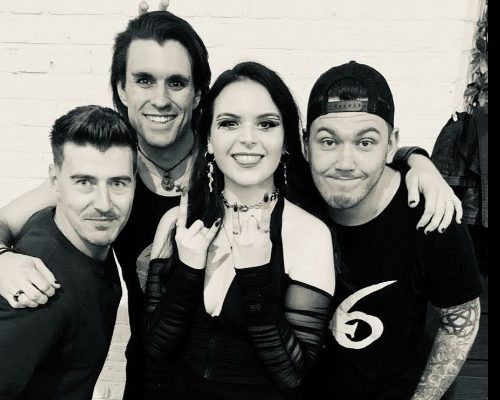 Who are ONCE? Where you’re from, how you met, how long have you been playing together etc

It was originally Harry, Chris and Oli that met out of pure boredom just before the lockdown after exchanging ideas and wanting to rehearse them. We auditioned a few people to take the role of lead vocals but it was until Natasha walked in the room that we knew we’d found that special ingredient we needed to launch ONCE. We all come from musical backgrounds so it was very easy for us to gel together and make amazing sounds together. Been playing together now for a year and a half now and in that time written more than an albums worth of material. Now that we are able to gig we are excited to get out there and show people what we’ve got.

At first we had loads of ideas for our bands name we tried to find something short and sweet to make us stand out and would be instantly recognizable but could never settle and randomly our guitarist messaged me ONCE and it just clicked and we’ve stuck with it ever since.

He messaged the group and we all instantly loved it. It doesn’t have any sacred meaning it was more of a symbol that could be pointed out anywhere.

So far our biggest claim to fame was being played on Vone Radio to 60 countries around the world.

Our process usually stems from our guitarist writing the initial riff from there we normally just jam the song until we are having a blast playing in rehearsals. The vocals are the icing on the cake and really bring the song together.

Our dream tour would be to support MUSE – We are also huge fans of Pale Waves so we would also love to perform with them some day.

We have a wide range of songs suitable for all crowds – Some songs are heavy hitters to really get your heads banging, some nice and slow and delicate to really mess with your emotions in a nice way. Taking millennials back to their grunger/emo roots reminding them of how amazing music used to be made. (With the crowd in mind) =D

Apple sours go down a treat  also a strong focus on performing at our tip top best and put on a great show.

Probably just a crate of Guinness for the stage and backstage. We love a Guinness. Maybe a salt water for Natasha our vocalist – It helps apparently.

Three guys and one gorgeous lady coming from very different backgrounds, one is a weather guy, one works in HR, one works for the NHS and one of us used to work as an Undertaker. O_o