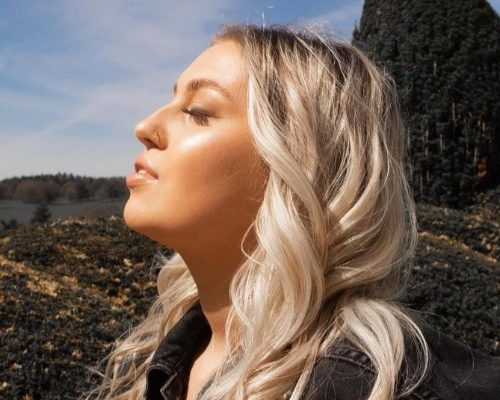 WANT TO HEAR MORE? Reya Jayne is taking part in RISING, our brand new series of live-streamed events, which aims to support and raise money for War Child UK to assist their work during the Covid-19 crisis.

Tune in to see Reya Jayne streaming live on Friday 15th May at 7.00pm

Who is Reya Jayne? Where are you from, how long have you been playing music etc?

‘An English rose with a Nashville sound’ – this is the simplest way to describe myself and my music in one go! I’m originally from Sheffield but moved to London to pursue my music when I was 18. Having been on the stage since I could walk, through theatre schools and vocal training, I ordered my first guitar off of eBay and the rest is history!

Taylor Swift has always been a massive influence of mine for obvious reasons, but lately I would say I have some more traditional influences coming through such as Shania Twain (an absolute QUEEN), the Dixie Chicks, Lori McKenna (if you haven’t heard humble & kind you need to, like, now) and of course, the one and only Ms Dolly Parton.

This definitely chances with each song that I write but when something doesn’t come to me immediately, I like to take inspiration from day to day life, making notes of phrases I see or things people have said, anything that sparks something creative. Then I have notes pages full on my phone of these phrases, and I just sort of group them to see what sort of narrative we can get. The centre of everything I write is that core story.

Taylor Swift – Speak Now, if you want to laugh, cry, sing along with the windows down, it’s all in that one album.

Singing ‘You Belong With Me’ on stage with Liz Rose (co-writer of most of Tay Tays first two albums) in Nashville at the Tin Pan South Songwriters Festival, a thing of dreams!!!

If Taylor Swift wasn’t an option, that would have to be Kelsea Ballerini. Her tours look SO fun and full of girl power!!

I would firm the world biggest girl band with country starts of past present and future! The Dixie Chicks, Kelsea, Taylor, Shania, Dolly, Carrie Underwood, it would be unstoppable!!

I like to think I’m quite relaxed when I’m playing – on the outside anyway. I like to have a chat with people and love to really take note of their interactions and responses to the songs. The audience are the most important part!

My pre-show ritual is usually just a stressy nervous text to my mum followed by a sip of wine to chill the nerves! Not the most professional response but hey, what works works!

Can I put Harry Styles on a rider?? Is that a thing??

Most embarrassing song – ‘Drop Kick Me Jesus’, stumbled across this while writing my dissertation and trust me you will not regret looking this song up.. And my guilty pleasure is all things Disney, including the parade songs… no shame!

Tell us one thing your fans would be really shocked or surprised to hear or learn about you.

I am a super maths nerd, A* at A Level, no biggie xo

Finally, what does the future hold for you as an artist?

So much more writing and working on new music! As of right now I’m doing as many live streams as possible to keep the music going, and there may or may not be an announcement coming in the next one on May 16th, Rising with Hotvox for War Child! Tune in and stay safe everyone!x