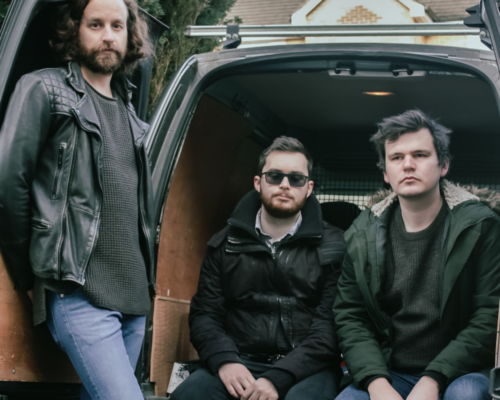 Who are The Mounts? Where you’re from, how you met, how long have you been playing together etc

We are a punk group coming out of South West London. Jake and Jack have known each other for years, meeting through their girlfriends back in 2017. After spending ages saying they should do music together they finally got together to form a new band, bringing Steve on board shortly after. The band formed late August 2021, and we had our first set down not long after that.

Jake and Jack are avid Chelsea fans, so when it came to finding a name after joking around with “The Drogbas” and “The Lampards” they finally landed on “The Mounts”, a name that doesn’t sound too stupid and pays homage to Chelsea’s brightest and most gorgeous talent.

“The Mounts are a band”

Guitar music in general. Jake was brought up on a heavy mix of mod and British punk rock including The Jam, Sex Pistols, The Undertones, as well as 90s britpop and early 90s grunge.

Jake once told UK Eurovision entry Molly that she was “alright” after she asked him how she did at a gig in London in 2014. He didn’t know she was doing it at the time, so he got a shock when she came out to sing “Children of the Universe”. She didn’t play that one at the gig or she might have got a better review.

Our songs are really about the country we live in right now and the anger and resentment everyone is feeling more and more. It makes subject matters easy to come by! Then it’s a case of finding an interesting chord progression and putting some words to it. There isn’t a process as such, usually Jake writes the tunes then the Jack and Steve put their spin on it in the studio till we’re all happy.

The Weeknd, so we can teach him how to spell his own name

All the members of Chumbawamba

Loud, energetic, usually near a bar so you can get drunk enough to have fun

Steve’s a big fan of the occult so we’re always having to stop him trying to summon supernatural forces before a show. That or a pint.

Having ex champion boxer Chris Eubank chilling backstage so we can ask him questions and he can give us support and encouragement. Reckon that guy would bring you some good vibes before a show.

Jack loves proper old school country and western. Brad Paisley’s his favourite, he’s got a life size cutout of him in his bedroom. Not sure his wife approves but she isn’t winning over Brad.

Glasto main stage, either playing or getting crushed against the fence