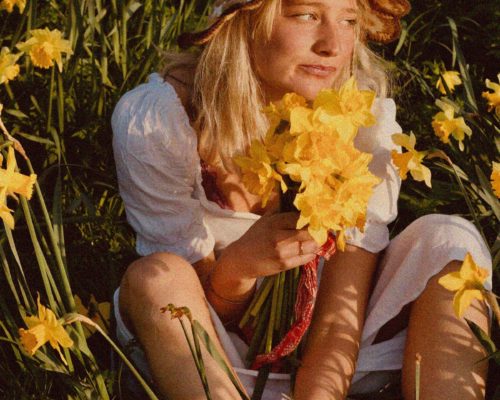 Jo Hill is a singer/songwriter from Cheddar. Taking influence from Fleetwood mac, Remi Wolf, and Benee, her music is a combination of indie pop, soul and jazz. Layering honest lyrics with soulful vocals, Jo will be playing with her newly formed epic girl band consisting of bass, guitar, drums and Jo on keys and vocals.

Who is Jo Hill? Where are you from, how long have you been playing music etc

Hey, I’m Jo Hill and I’m a singer/songwriter from the village of Cheddar (yes, it’s where the cheese is from). I’m a Somerset girl born and bred but I now live in London to follow my dream of becoming the next Dido/Remi wolf/Megasupafamous pop star. I’ve had a weird journey into music but it has always been a massive part of my life; From writing a song for my terminally ill aunt when I was 12 to winning Cheddar Rotary Competition aged 9 singing ‘Where is Love’ from Oliver Twist, music has always been in my blood. I started playing the piano ages 5 and my dad taught me the violin aged 11. I used to HATE music practice but now I’m super grateful to my dad for (what felt like) forcing me to practice every day. Throughout school I was always writing songs, singing in bands and playing in orchestras. I even wrote my ‘Head Girl’ leaving speech as a song to the melody of Bohemian Rapsody. After finishing school, I decided not to go to music school/peruse a music career because it didn’t seem realistic or achievable and instead I went to university to study Arabic and Anthropology. This was insane and I got to live in Jordan for a year. It was in Jordan that I started seriously song writing, gigging and meeting producers out there, I even learnt the Oud. I got my first song writing cut in 2019 on a BTS track called ‘Make it Right’ (this was not down to me but honestly right place right time situation) and this opened a lot of doors for me/made the idea of being a songwriter/artist for living seem a bit more reachable. It was from this moment that I decided to seriously peruse the singer/songwriter dream.

Warm, bright, melodious (is this a word), harmonic, soulful

I always come up with the best melodies when I’m cycling or just working/doing something menial. This sometimes means stopping on the side of the road whilst cycling to record a voice note of a melody I’ve just come up with then going home and making it into a tune. Sometimes I write using the piano or sometimes make a beat to write along to/use logic. I also write/work with other producers. I’m very much a melody first, lyrics second kinda writer. Unless I come up with a sick chorus top line lyrics, the I work from this.

I’m about to play my headline show at The Spice of Life in Soho (Adele and Ed Sheeran played here apparently!). I’ve also played at Glastonbury Festival which is pretty cooool.

Easy Life- they look so fun and I LOVE there music- I’m obsessed with the lead singer.

If you could put your dream team band together consisting of any musicians from the past or present who would the band members be?Freddie Mercury

Absolutely lit but also captivating/full of story telling – it’ll make you smile, might make you cry and also want to be in a girl band

Do any of you have any pre-gig or post gig rituals? If so, what and why?I ALWAYS drink this Chinese herbal throat medicine before every gig and I usually drink a whisky ginger before playing.

My weird eating habits- I’m obsessed with pickles- They’re my favourite drunk snack (I once ate a whole jar of pickled red cabbage) and the first thing I eat in the morning is dark chocolate with a cuppa hot coffee.

Finally, What does the future hold for you as an artist

Play Glasto Pyramid OR the other stage and perform at Coachella in 5 year’s time- say no more.

Create a mixtape of Collabs with loads of cool artists

Be the Support act for Haim or Easylife, or Lewis Capaldi

Write with some of my fav songwriters- Raye and Kamille