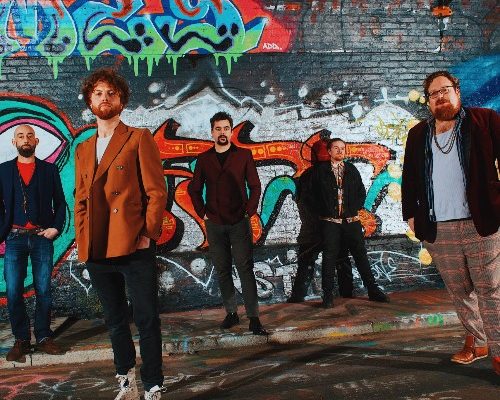 Rum Buffalo fornicate with rhythm and melody. Mingling many genres, they blend blues, fiery pop-rock and space punk with filthy synths and epic horn lines. The band have stormed the London music scene with their unique and powerhouse sound. Known for their unforgettable shows, their live performances are packed with massive bass lines and carried by unified melodies. Their unique performances border on the surreal, with three-piece horn section, and fire performance brought together The 8-piece band have toured the world, with performances in Iceland, Switzerland, France, Turkey and Malta, along with a string of gigs in New York City, which included a show at Manhatten’s Rockwood Music Hall.

Who are Rum Buffalo? Where you’re from, how you met, how long have you been playing together etc

we are Rum Buffalo. a collective of musicians who share a passion for making big and dramatic sounds through music whilst making people dance! we are all london based and met through festivals and parties in london. we came together 9 years ago on the streets of Covent garden, busking old jazz for money.

I came up with the band name . in the early stages we were busking on the streets and playing old 1920s jazz music. we mingled in a very old subgenre thats not so well known now called western swing. this was a cross between jazz and country music. “cowboy jazz” we called it. it was fun to play om the streets an bought the crowds in. anyway we started getting offered gigs so we had to choose a name and this one just came out. the buffalo to represent the western music and the Rum, well, we like Rum. even though we play original music now and the genres we play are completely different to how we started, the name stuck!

Rage against the machine, Duke Ellington, Destaat Jack White, Queens of the Stoneage, Tom Waits and of course Beyonce

Performed to 10,000 people at one of glastonbury’s headline stages

melodies and riffs come to me, I try and put them to chords. I take them to the drums and bass and we work out a strong groove. We write horn lines to layer on top. sometimes the horn lines play the

Destaat: amazing band from the netherlands. i think our sounds would work well together

it’s an explosion of unified sound, bringing you all kinds of mad Riffs layered on top of a heavy beat. we will make you dance. you will be singing the melodies on your way home. We like to make a big thing out of our live show, the music is raw and dramatic. it’s a bit like a garage rock, space punk circus…

we have none. we are proud of them all. although some are rather dates :/

front man got run over by at 2 ton sand lorry when he was 4 and survived!