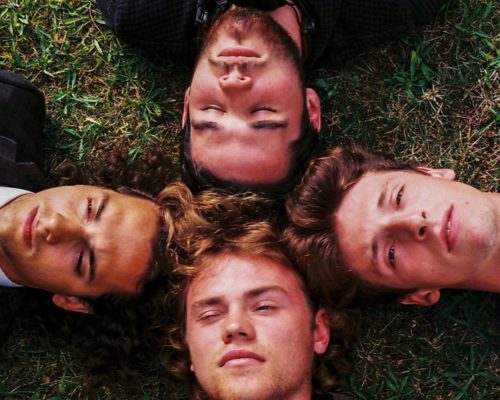 Anglo-French indie pop from London, weaving together eclectic influences into catchy and poetic tunes. Daytime’s Past EP out now on Spotify and Apple Music!

Who are SOURFACE? Where you’re from, how you met, how long have you been playing together etc

We are a non-differentiable spectrum from French to English: Alex being most-French, Ludo, second-most, Tom second-least, Matt the least.

Matt and Ludo met each other at an elite boarding school but didn’t speak until their paths crossed again at university, when at that point Matt had befriended Alex due to nearly cutting his finger off on his first night in halls, and running into his room for help.

Tom joined ‘Michael’, ‘Hugo’ and ‘Antoine’ (Tom’s early accidental misnomers) later when the other three required a drummer for a jazz band.

The whole thing escalated when the band was employed to play for a fake wedding in Derbyshire.

Matt came up with the band name. It derives from first year escapades when the boys would climb up onto the roof of the student union with some drinks, calling it ‘the surface’. The more poetic meaning of the name is a cross between the “sourness” of the flux of traumatic cosmic energy, and the “face” of man as a worldly social being who is accountable to others. Their unification signifies a new era of universal chaos on earth.

Claude Debussy, Rage Against the Machine, the Beatles, Astrid Gilberto.

We think we saw the lead singer from Fontaines in Camden once.

Ludo or Alex writes a song. Presents it to the rest. Undergoes varying degrees of metamorphosis until it emerges as a full-fledged Sourface banger.

溺れたエビの検死報告書  or “Drowned Shrimp” in English. I want to borrow their costumes.

Ludo and Alex drink tequila. Matt drinks a pint. Tom has a nap. Jump up and down saying random things. Go out on stage.

A pond of Koi with a little bridge leading into the dressing room. Silk kimonos. Geishas.

Alexandre has put behind his dark past listening to Muse, but I suspect when he’s home alone he might still stick it on for the nostalgia factor.

We are forced to be musicians against our will. Really I am not joking. We have been kidnapped. Help us.