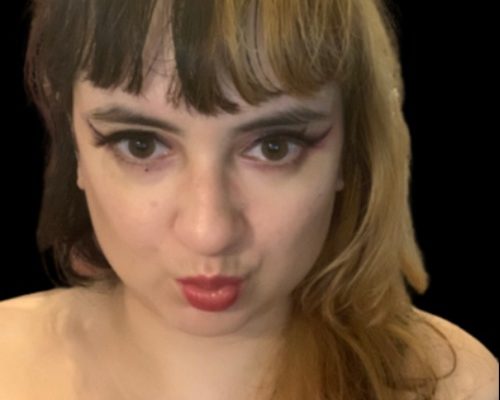 Who is Suzie Geeforce? Where are you from, how long have you been playing music etc

I’m an electronic music producer and spoken word artist from London! I learnt how to play piano when I was around 7, but started making music creatively from 19 when playing bass in an alt rock band! In terms of my solo work, I’ve been creating things on and off for about 5 years.

One of my uncles would affectionately call me Suzie Q – I can only imagine it was after Suzi Quatro, which I consider high praise indeed! When I was thinking of a stage name, I thought of maybe taking this reference but tailoring it more towards my actual name. Suzie Gee became the stepping stone – then, with a science fictional twist, Suzie Geeforce was born!

I start with moods and concepts first of all – and experiment musically with ways to express them! I usually start with the rhythm section, building up drum layers – and then I add the chords/bass. After that, I’ll think of how to put the words to the music and try to fuse them together. I think I’m more comfortable shaping words than sounds, so the latter is usually laid down first!

I really liked Garage when I was younger, especially The Artful Dodger (showing my age). The energy behind the drums was so infectious!

I got to perform in Los Angeles a couple of years ago – and it was amazing to perform music outside of the UK! Some of my poetry was also featured in the Schuh campaign “Embrace your Feels”.

I’d like to tour with maybe Hana, Grimes or Ashnikko – I think our styles would go together well! I adore their aesthetics and ways of performing as well.

This is hard! I’d say Simon Gallup (from The Cure), Atticus Ross, Trent Reznor and Yaeji would be a cool lineup!

A chill synthy soundscape where you can feel immersed in another world. Someone once described my sound as sultry geekiness – I need to put that in all my press materials!

I usually go over the first lines of each of my songs – so I always have that muscle memory to fall back on, if that makes sense! I’m a big advocate of power posing – I always try to get at least one in before I get on stage – sometimes even in the bathroom minutes before!

I would have a tray of Squashies (the soft candy) and cans of Red Bull – the perfect sugar/caffeine combination before a big performance!

I think that no-one should feel guilty about what music they like! I have all sorts on my music library – from Videogame Soundtracks and Kawaii Future Bass to Rock, Pop and Techno!

Hmmm, maybe that I have a PhD in Science Fiction Theatre? It was a practice based course where I wrote and produced Science Fiction performances specifically to be staged theatrically! It was stressful, fun and fulfilling in many ways.

I’d say Spotify (Suzie Geeforce), Instagram (suziegeeforce), Twitter (suzie_gee) or Twitch (suzie_geeforce) would be good places to go to! I also stream music productions on the latter on Tuesdays if you’d like to hang out and chill over some tunes!

I’d like to make more music in general, collaborate with more artists, perform more internationally as well as within the UK – and I’d love to compose scores for games in the future! Watch this space!