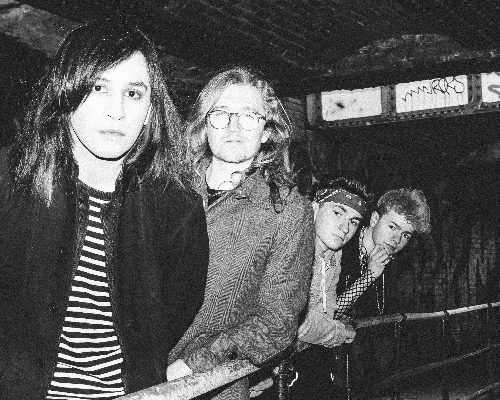 We sat down with RAVENFANGS to find out what makes them tick ahead of their big premier for RAGE!! this Friday at midday, watch as it goes live here – https://hotvox.co.uk/event/rage-music-video-premiere/

In this feature, we’ll speak to some of HOT VOX’s favourite new artists on the gigging scene and find out what shaped them into the artist they are today.

South-West London Rockers, RAVENFANGS are not simply a band, but a communion of ideas and intents. Marco, Joe, Will and Simon make RAVENFANGS, a particularly unique band known for their raw and high-powered live shows.

Who are RAVEFANGS? Where you’re from, how you met, how long have you been playing together etc

We wanted the name to include fangs so we settled with Raven. It was Marco’s idea to add the name of Raven before Fangs as there’s a cat who comes to his garden every morning with big fangs and he calls him ‘Raven” and then we all felt it was a good name for our band.

Well, we all have the same taste in music from classic to modern, here are a few of them.

Rage Against the Machine

Always, usually Marco comes up with something nice and brings it in to show all of us and we add on to it and make it even better, or sometimes any of us will play a riff and then God gives us the rest Pure Magic.

Would have to be Wargasm, Liam Gallagher, Arctic Monkeys, Inhaler, The Sherlocks, Pale Waves, IDLES.

They all just have an unmatched energy.

It will be a good craic.

An exhilarating/explosive experience that while on the dancefloor just makes you daydream and be connected to yourself and everyone else around with lots of energy that makes you go bonkers! and at the end of the show makes you just want to be forever in Love.

We huddle around, pray for skill and give fist bumps to each other for good luck.

Because we all are God’s Children.

Just lots of Yorkshire tea, Cheese, Fish, Pizzas, Salads, Bread, Honey, basically lots of food and the other good stuff. Oh, we would definitely need to have some nice good quality clothes and shoes to keep it up and stand out while on this Universe called EARTH.

One Direction, 5S0S, ED Sheeran. They are good at doing what they do!

WE ALL COME FROM MARS

We are on all streaming platforms including Spotify and Amazon music and we have the music video for RAGE!! Coming out on 21st of May.

Finally, What does the future hold for the band post RAGE!! release?

Touring and playing big shows all over the world and better music to be released!