With an abundance of amazing artists and awesome shows coming up in the calendar, we’ve carefully handpicked one of our stand-out events, which we are particularly looking forward to!

So save the date, add it to your calendar, pin it on your notice board as you won’t want to miss this one. 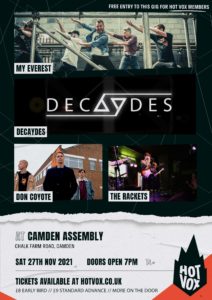 My Everest are a British 5-Piece band who combine heavy riffs, melodic hooks and an on-stage charisma unrivalled for a band this fresh. My Everest — made up of vocalist Connor Sturt, guitarist Sam South, bassist Eddie Bennett, drummer Joe Co... view artist profile

Charlie and Sam met when teaching together in Newcastle, and quickly discovered their music taste and style was very similar. The band has been performing since  2019, and from the beginning knew they were a perfect fit. They have been giggin... view artist profile

We are a four piece Indie Rock band that are based in Wimbledon.
Heavily inspired by the likes of Arctic Monkeys, Oasis and The Libertines we try to take the raw strength and aggression present in their music and translate that 2000’s s... view artist profile